If you are out of work or underemployed, and have grown weary and disheartened by your search, I urge you to read this blog post. If not, please pass it along to someone who is in that situation. It’s a story of how one person (me) heard a message that changed my thinking about a job search – with miraculous results.

It was years ago. I was in my early 40’s – a time when I expected to be at or approaching the peak of my career. But you know how life is – “Life is what happens to you while you’re making other plans.” (Did one of the Beatles say that?)

I had all the academic credentials one could want. I had good work experience, including both corporate positions and consulting clients. But somehow, work had dried up and I was in a search for my next work. I had decided to stop chasing after consulting assignments, and go for a corporate position- most likely in “corporate planning” where I had good credentials and some keen interest.

My search was especially important because a) my wife did not work out of the home (so there was no other income besides what I generated) and b) our first son was about to go off to college, with his three younger siblings close behind (so our expenses were going up dramatically) (No pressure, right?)

I created a search notebook in which each section in which each section was a different approach – one for employment ads and any communication about them; one for personal contacts; another for associations I had contacts in, another for targeted companies and contacts in them, and finally even a “cold” letter I sent to four companies in my state (CT) that I’d be interested in working at, but had no contact in. Each day, I kept busy working on each section. I figured that hard, steady and focused work on this search would eventually pay off.

But I did more than that. Realizing that morale could easily sink, and that attitude could make the difference between a successful search and a failed one, I found a way to stay up: I made sure that each day I appreciated the new people I was likely to meet. Most people with regular jobs do not have that opportunity. So each day I began with the affirmation: No matter what happens today – no matter whether I find a job today or not, I will meet some interesting people. I look forward to that and am grateful for that experience.

Eventually, however, my confidence sagged and my fears exploded. Money was running out, and I was looking into a dark future. My mind took a downward turn: at some I began affirming: “Okay, I’ll take any job. Just let me get back to work!”

Maybe it was my father saying that I should start over and come in at the ground flow. I had rejected that advice, at least in the mind. But emotionally, I think that’s where I was.

Are you in this position yourself and at a point where you’ll take just about any job to get some revenue coming in?

If so, you may be interested in my experience of coming out of that dark tunnel – thanks to what I call “a message from Spirit in the dark night” – as well as help from my wife.

It was early December – about this time of the month. I had been actively looking for well over six months.

One of the search firms to which I had sent my resume called me and said they had something that I might be interested in. So I met with the search person at Bradley airport near Hartford. The job was definitely of the “ground floor” species – and it was far less compensation than I had been making. And it was in Michigan, meaning we would have to take our children out of the schools that they were used to and had friends in, and plop them into a whole new environment.

BUT it was a “job” and they were interested in me. It meant a resumption of income, even if we would have to live at a far lower standard of living than we were used to.

So, that was my Mind at work. You’ll soon hear about Spirit at work.

I told the search person that I’d be interested in interviewing for the job. So on an early December Thursday I flew to Grand Rapids, where I rented a car to drive to Holland, MI. The next day I was to go to the company and meet people there with whom and for whom I’d be working.

It was dark – and rainy – and windy. I was driving into the wind, which was coming out of the West, Then the rain turned to snow. I felt alone out in the wilderness. I arrived at the motel where they were putting me up. On the driveway into the motel, I noticed that the driveway was flooded.

The motel was situated on an inlet, essentially a narrow passage from Lake Michigan leading to Lake Macatawa, a five-mile long lake that was less than a mile wide. The room they gave me had a sliding glass door leading out to a lawn that extended out to the inlet.

I went to bed after a long day of traveling, looking forward to a sleep that I expected would rejuvenate me for the day of interviews. But that was not to be. 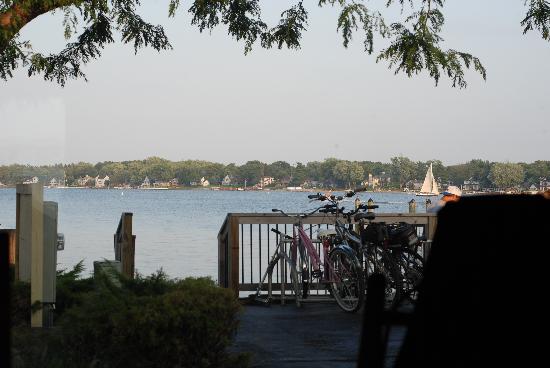 (This photo of Holland is courtesy of TripAdvisor.)
A view of Lake Macatawa in Holland, MI – in better weather.

After about an hour, I was awakened by a strange sound: it was sound of trickle, trickle, SPLASH. It was caused by water coming across the lawn and landing up against my sliding glass door. I lay in bed listening to the same sound over and over.

Finally, I called the office (which was up a slight hill from the building I was in) and said, “There’s water coming up against my door. I’m from New England, and where I come from I’d say we were having an unusually high tide.”

They apologized, saying it must be the wind blowing water from Lake Michigan into the narrow Lake Macatawa on which Holland, MI is situated. They gave me a room instead on the second floor. Well, that would be okay if the water was going to do no damage to the ground floor! But I was too tired to think of that. I was just happy to get away from the water – I thought.

So I lay down on the bed in the new room – and heard the same sound. “Trickle. Trickle, SPLASH”. But this time it was under me. The new room they had given me was cantilevered out over the ground floor, so the water activity was underneath the bed in my new room.

I called the office once again, and this time they gave me a room on the other side of the building, the inland side, which was also on higher land. I suppose I slept, but not very much.

Sometime during the night, the electricity went off. After a fitful night, I awoke the next morning to find that the cars which had been parked in the lower end of the parking lot were half under water. Fortunately, I had parked at the high end of the lot. I remember taking a cold shower, and shaving in an unlit bathroom.

During the day, I was de-energized, mostly (I thought at the time) from the harrowing night. The people interviewing me were very nice, and explained the job and the company, but I was not showing any enthusiasm. I thought, sure I could do that, but there is so much more in me than that.

At the end of the day, they had arranged for me to tour the area with a realtor to start getting a feel for the local real estate market.

By the time I got on the plane that evening in Grand Rapids to return to my home in CT, I was numb. I first thought: I don’t want to move to Michigan for this job. But the next phrase that came out of my mind was: What just happened? It was like Spirit was trying to get my attention. Like a wakeup call. “What are you doing?” it seemed to be saying. And mainly “what are you thinking?”

I began to question the almost subconscious belief I had fallen into: I’ll take any job that comes along.

When I got home that Friday night, I was so tired (and confused) that I said to my wife, “It was a long trip.  ll tell you about it tomorrow.”

The next day, I told her about the storm, the water, the sleepless night, and me dragging myself through the day of interviews in a numbed state. It was she who first introduced the idea that just maybe Spirit or my soul or whatever was trying to send a message, a wakeup call. She said, “Why don’t you just rest today and then tomorrow we’ll work together on the issue.”

The next day, Sunday, in the evening, she sat me down and helped me relax and be open to Spirit. She asked me then, “What is it that you really want to be doing? What would be your perfect job?” I then described being a director of corporate planning for a mid-sized firm, and why that’s what I wanted to do. She then asked me to affirm that as my highest good, and to hold that image in my heart.

It was an uplifting experience that got me in touch with what I really wanted to do – and that freed me to desire it.

Maybe Spirit was listening. The very next day, the first Monday of December, after months of struggle, I got the first glimmer of hope. I received a call from a search firm saying they were calling in reference to a letter I had sent the CEO of a mid-sized CT company. They were doing a search for a Director of Corporate Planning, and so were following up on the letter that I had sent them. It was one of the four companies that I had written “cold” – I knew none of the executives there and was not responding to an ad (and I had not followed up with them).

I was amazed. Out of the blue, the very day after I did that special meditation to get in touch with my inner Spirit, I heard from a potential employer. I went in for interviews and the next month started work there – doing exactly what I wanted to do, as Director of Corporate Planning and a member of the senior management team, at a compensation level about 75% higher than the Michigan job.

Just think: If it were not for that storm, that inlet, that motel – that Message from Spirit, my path might have taken me in a different direction.

Just think how amazing it is that when we’re taking a path not aligned with our inner Spirit, then Spirit may actually speak to us– in whatever way is available at the time. It was just that message in the middle of the night, coupled with my wife’s intercession that got me back on the path meant for my highest good.

Is your Spirit trying to speak to you? Are you blocking it, or are you allowing it to speak. And, if the latter, are you holding the image of greatness that is meant for you to express in a job that is perfect for you?

3 comments on “A Message in the Dark of Night”

This site uses Akismet to reduce spam. Learn how your comment data is processed.